Born to a family of kimono merchants in Kobe. In 1912, at the age of 5, she was selected by an elder monk of Nanzen-ji Temple in Kyoto, and joined Reikan-ji Temple (Shishigatani) at Mt. Higashi. At the age of 8, she moved to the monzeki convent Donke-in Temple in Sagano, Kyoto. Here she trained under the nun Jikō Asukai.

In 1937, at the age of 31, she received the request to become the abbess of Sankō-in from Monk Eiju Mamiya, who was both a friend of Asukai and head of the famous Hoko-ji Temple (a head temple of Rinzai Zen located on Mt. Kohokugo by Lake Hamana). At the request of the mayor of Koganei, Soei opened a preschool at the temple, and introduced the shōjin culinary arts in the style of the Bamboo Palace to Musashino region. This particular style of shōjin cooking is a tradition dating back over 600 years that she had learned at Donke-in. Here, she trained nun Kōei Hoshino to be her successor. 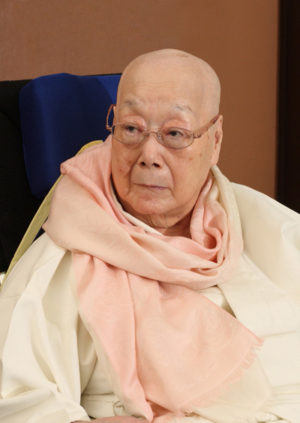 Born in Asabu, Tokyo. During her childhood in Hidaka, Saitama and Kunitachi, Tokyo, she developed a fondness for literature. After a time spent being a very “modern” girl throughout her high school career at Fuchu Musashi High School for Girls (known today as Tokyo Musashi High School), she graduated and became a substitute teacher at a primary school in Hamura, Tama.

However, she abruptly quit and at the end of World War II, transferred back into her alma mater which had been newly reopened as Musashi High School. Between her schoolwork she frequented Sankō-in, where she also studied under abbess Soei Yoneda, and went on to gain entry into Taisho University with the intent to become a Buddhist nun.

After graduation, Sankō-in became the stage where she demonstrated her talent in breaking molds. She aimed to keep up with the times, and the effect of her efforts can be seen in her selection as the principal of the preschool opened by abbess Soei, as well the invitation she extended to a TV music program to film at the preschool. She also aimed to mainstream Kyoto’s Bamboo Palace’s style of shōjin cuisine, which she had learned as part of her training under abbess Soei; and in this endeavor, she published many books on shōjin cuisine, including English translations. She regularly dedicated herself to globalization, including giving lectures at the International Christian University (ICU) and United Nations University (UNU), as well as in the United States, as a missionary of shōjin cuisine.

During this time, she trained at the Zen temple Heirin-ji in Musashi, and sought further understanding of the Way of Zen under Eshin Nishimura at Hanazono University in Kyoto. She also endeavored to write a modern translation of “The History of Tsūgen-ji” (Tsūgen-ji Shi), which was the original temple that later moved to Donke-in, and she did so with the hearty blessing of Jikō Asukai, the 29th abbess of Donke-in. Abbess Kōei produced the TV program “Kyoto Monzeki Convents”, which put the spotlight on the culture and lifestyle of the monzeki convents in Kyoto and Nara, gathering attention to this precious culture which had been hidden beneath a veil since the middle ages.

Abbess Kōei trained Aya Nishii, a French culinary artist, in the ways of the Bamboo Palace’s style of shōjin cuisine that is the legacy of Sankō-in. In time, the abbess named Nishii her successor in these culinary arts.